For my entire life, my favorite breed of cattle – hands down – has been Brahman. Yet, as I ventured further and further away from good ol’ Hungerford, Texas, I found that there are some folks out there who know nothing about Brahmans. If you’re a Brahman fan,  you’ll get this. If not, I invite you to learn more about Brahmans and why they are MY favorite breed!

Until I started showing Shorthorns, I had no idea what tie outs were. What was this mass exodus from the barn around 7:00 p.m. every night? Brahman people, in general, don’t do tie outs. To be honest I’m not exactly sure why. I think it’s to keep them warm in the winter by letting them stay in the barn. But if you go to a Brahman-only show, most people stay in at night. My family goes to tie outs, but it’s only because we learned it from Shorthorns. Brandy Barnes goes to tie outs…the Collins go to tie outs. We’re the “steer jocks” of the Brahman breed.

Brahman cattle are short haired, so, no blowers for us. Just lots of brushing. Rice root style.

When other haired breed showman are trying to grow hair, we’re trying to slick it off. Some Brahman people leave the lights on in their barns 24/7 to try and combat mother nature so the cattle actually won’t grow hair, thinking it’s summer. During winter, we brush and brush and brush to try to get the hair as slick as possible. The shorter the better.

Brahman people use these giant leather halters — not your typical show halter. They use the big bulky ones even on heifers. Real feminine right? We were the first people to use a dairy halter (what everyone thinks of as the normal show halter) back in 1986 on a little heifer named “Cover Girl” who was super stylish. Brahman people FREAKED!!! Tried to ban these type of show halters! There are some people now who use the typical show halter, but most of the old school ranches and old school showmen still use the big ol’ bulky ones. 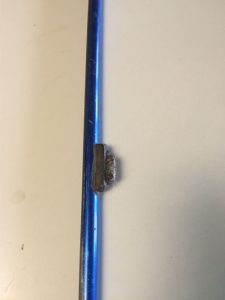 Hereford guys have their wooden showsticks, we have the Brahman brush. This was actually invented by James Daniel, longtime Brahman herdsman. He used a small wire brush, glued towards the bottom of his showstick, to just scratch them and keep them calm. Trust me – this little 2 inch brush is like a magic gentling machine. Some people use hairbrushes or other little brushes, but the original was a small wire brush. James glued one on my showstick for me when I was 11, and it’s still on there today.

7. Your hands. After you pet a Brahman. 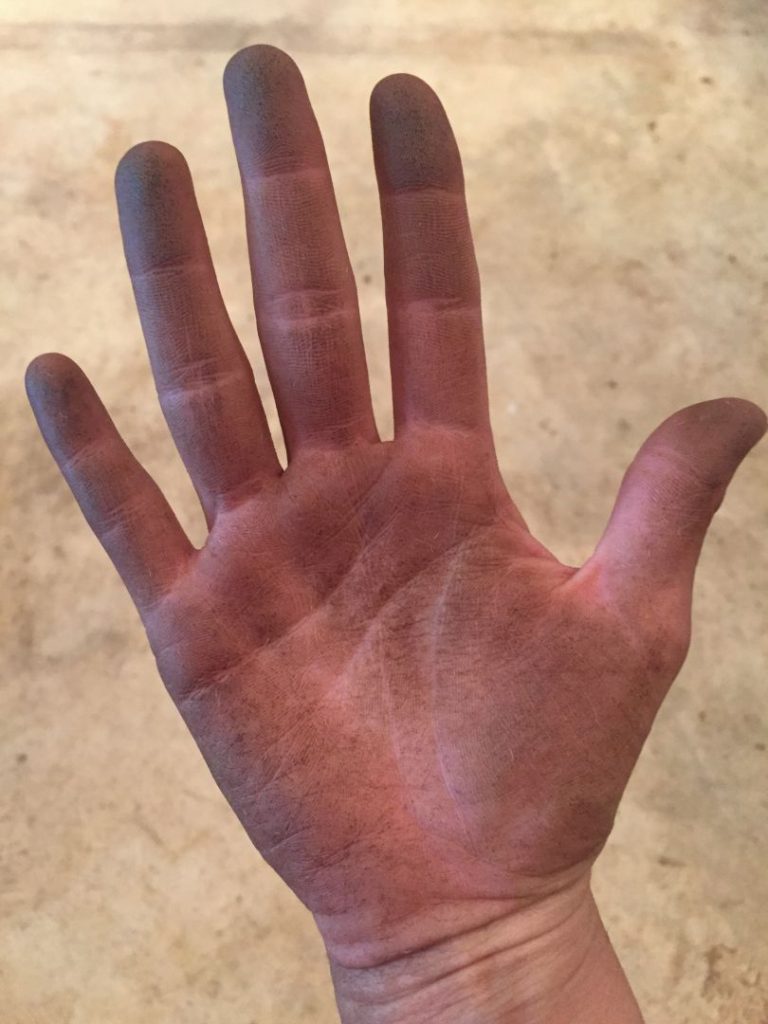 Brahmans have this oily substance that secretes from their skin after you pet them — especially in the summer. Spend a few minutes petting a Brahman, and your hands will look like the photo above.

Stay away. Earlier this year, we had a party at our show barn. Kids were running around having fun. All of a sudden we hear a blood-curdling scream coming from the back of the show barn from Mollie (my 5-year-old daughter) and her friend Ross. Instantly – everyone knew what was going on. Mollie and Ross were in the pen with 934, who just had a baby, and 934 was chasing them. Picture 10 adults running towards the back of the barn in hysteria. Thankfully, Mollie and Ross jumped the fence just in time, before they got thrown over the fence by 934. This is actually a good thing though – because just like a Brahman cow will chase away a human, they’ll also chase away buzzards, coyotes, lions, tigers, bears, you name it. Moral of the story: stay away from Brahman cows who just had a baby. They will G-E-T you.

(The same thing could actually be said about mothers of some Brahman junior exhibitors. We tend to be a protective bunch lol).

While most showman today wear a number harness, there’s still a lot of old school Brahman showman who wear number clips. As in, loop them through your belt style. And if you are really lucky, you have an old school one like this! There was an old Indian man who used to be at the Brahman shows in the 70’s and 80’s and who made them. That’s why a lot of the old school herdsmen still have them and use them.

Close your eyes and imagine the sweet sound of a baby Hereford calf moo-ing in a field of clover. Then imagine a bulldozer sound blaring through. The Brahman is the bulldozer sound. They have this crazy voice. It’s called Brahmonics.

No, they aren’t wild. Hence the photo above. I’ve showed Shorthorns (who I think can actually be some of the dumbest cattle around) and I’ve showed Brahmans. I actually prefer an alert Brahman over a dead-headed Shorthorn any day. These cattle are proven to be some of the most intelligent cattle on earth. They are smart. They remember things. When you treat them right, they are some of the most loving and gentle cattle you’ll find. People literally fall in love with Brahman cattle. They’re addicting.

What would you add to this? Are you a Brahman fan? Comment below and let me know what YOU love best about Brahmans.

Each week, our team at RHD publishes informative and fun blog posts about the agriculture industry. Join our mailing list to make sure you never miss a post! If you’d like to learn more about our services, visit our website or fill out our free price quote form today!