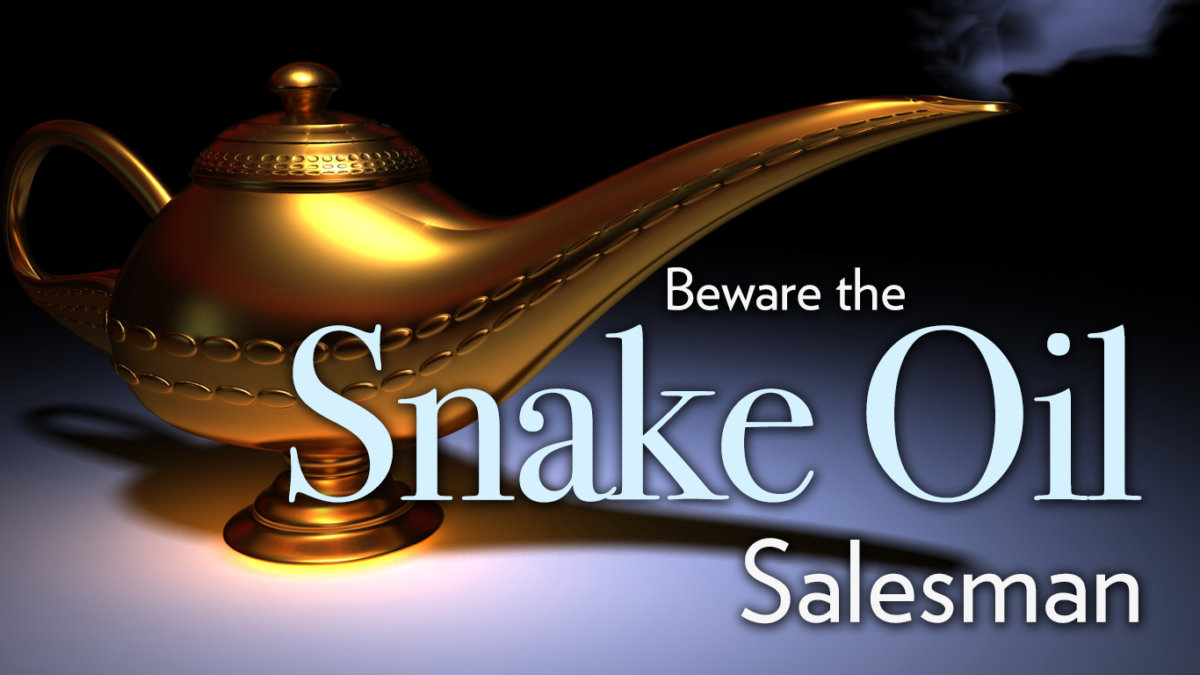 “I have a theory that the truth is never told during the nine-to-five hours.” Hunter S Thompson

As sale season is wide open I always think of this term – the “snake oil salesman.”

Wikipedia explains that a “snake oil salesman” is a common expression used to describe someone who sells, promotes, or is a general proponent of some valueless or fraudulent cure, remedy, or solution.

And there are a few of them in the cattle business.

The Program > The Animal

You constantly hear who you can/can’t do business with.

Some operations have an almost cult like following, while others make you wonder how the Koolaid hasn’t killed someone yet.

For some, sale season is a time of introspection: a reflection of the accomplishments, the what ifs and the almost. Not to mention, the highs and lows that come with selling livestock. We search for something during this time of year, and I don’t think it’s just an animal. For some, it’s looking for a place to belong.

I heard Hummel and Rash say, “People buy into a program now, not just an animal.”

That resonated with me. They are 100% correct.

If you look at the big picture, now days you see hoodies, pullovers, hats, social media propaganda, custom ear tags, sale catalogs and more at a level that has skyrocketed to an all time high.

It’s almost like the customers pitch operations harder than the actual operations do anymore.

“Come on over, the grass is greener over here.” Maybe so, but there might be more shit that goes with it, too.

Loyalty is another issue. How much are customers willing to take before jumping ship or searching for a new “home”.

The other day I heard a discussion and its true – For every one good story you hear about an operation, there are 10 bad ones. Likewise, for every bad story you hear, you can find 10 good ones.

So much truth rings.

Why do people get into some of the situations they do?

Some of the things we hear ringside are downright hilarious but sad.

As I’ve said in previous soapboxes on Facebook, “No one held a gun to your head and forced you to buy the POS.”  That was the decision you made and you have to live with those consequences.

So it got me thinking.. What makes a family pull the trigger?

To go all in with no looking back?

People’s ultimate goal of what they want is a driving factor in all of this.

Now onto the topic… Beware the snake oil salesman:

We’ve all seen them:

You buy the ketchup popsicle with a smile because, why not, they seemed nice enough.

As someone who has been active in this industry for years and I hear the phrase “guaranteed win”, I usually need an oxygen mask because I’m on the verge of passing out from laughing.

Who in their right mind will take on an animal for that phrase?!
How big is their set of the person selling it to promise it??

This industry sometimes loses track, and buyers and sellers feed off each other for it.
But, the snake oil salesman knows his target. It’s usually the new person. The person who’s so hungry for a win and wants is SO bad they they can’t see through the smoke and mirrors. They’re the first ones to fall in with someone who promises the world and can’t provide a shovel.

On the flipside of that coin, the “good” families can spot the snake oil salesman a mile away. And, they usually keep a fair distance. These hard working, knowledgeable families don’t associate with the snake oil salesman. Instead, they usually watch from afar and scratch their heads how some of these snake oil guy’s customers truthfully can’t tell a breeding animal from a market heifer. (That’s as nice as I could put it).

I guess the part for me that absolutely obliterates my mind is how folks keep going back for more from the same place, year after year, season after season, to get the exact same results. And, they buy into it time after time again.

So, if you’re still in question, let’s recap the snake oil terms and my response.

“Politics.. you know your calf was better.”
Well Ralph seeing as how yours moves like the blue hairs in a retirement home try again.. but yet somehow they will agree.

“Don’t worry, we are a great home.”
Ahhh your checkbook doesn’t make the home Cathy.. your work ethic does.

“We can’t compete with the big guys.”
You literally just told me you’ve been doing this your whole life… how have you not made a name for yourself yet George?

“Those pics were photoshopped way too hard.”
Maybe, but I doubt those guys hired the Cohen brothers to do the video Becky, not to mention you wouldn’t get yourself in a vehicle and drive 2 hours to see for yourself.

Beware of the Hype

We often get hung in putting ourselves in and around the hype. Remember, most ads and social media posts that an operation puts out are 100% self-promotion and designed to show a one-sided view.

Like I told many people, just because their grandparents and parents did it doesn’t mean they are good at it.

I mean, hell, I come from a construction family and you don’t want me building a road for you, I promise.

So, for starters, just because an operation is a multi-generational one, doesn’t mean there is a ton of success. It could means they have just been able to steadily find a string of new victims that buy into they hype.

Now, again, that doesn’t mean I don’t believe every generational operation is like that. We do business with some multi-generational businesses and know there are some great ones. But, just because an operation claims to be a “family” operation, doesn’t necessarily mean they’re a good choice to do business with. What’s that saying – the first generation builds it, the second generation maintains it, and the third generation ruins it? There is usually some truth to that.

We only have a finite amount of time with our children in the ring to do these projects. I urge you as parents and all those involved.. make the most of it.

Get in where you fit in. Find that success that your budget and work ethic will allow. Don’t let the snake oil influence you. Every moment and dollar you give to one is a project a year and time you can’t get back with your child.

It’s also not against the law to do research and “vet” the people you buy from. Trust me, you might save yourself and realize they’re spewing one hell of a marketing gimmick and you’re falling face first in a flooded washrack.

Here are some tips:

Again, as a parent, when you align with a program, it’s your time and your money on the line. Find a good operation, trust them, and allow them to help you.

AND STOP ASKING FOR HELP FOR PEOPLE WHO CAN’T WIN A DAMN THING!! Their advice is always free because it has no value.

Stay Away from the Victims

The last piece of advice that needs to be addressed when it comes to the cobra commanders of the stock show world..stay away from the victims.

If all you ever see is an operation making excuses and a way to be a victim… you will fall under the same mentality.

And, the victim mentality has got to end. Stop with the excuses.

Are you choosing based off the things that really don’t attribute to winning? Or, are you allowing yourself to get caught in the moment and that snake oil salesman saw your weakness and seized it?

I close with this, referring to what Hunter Thompson said in my opening.

You are better buying these things before 9 and after 5.