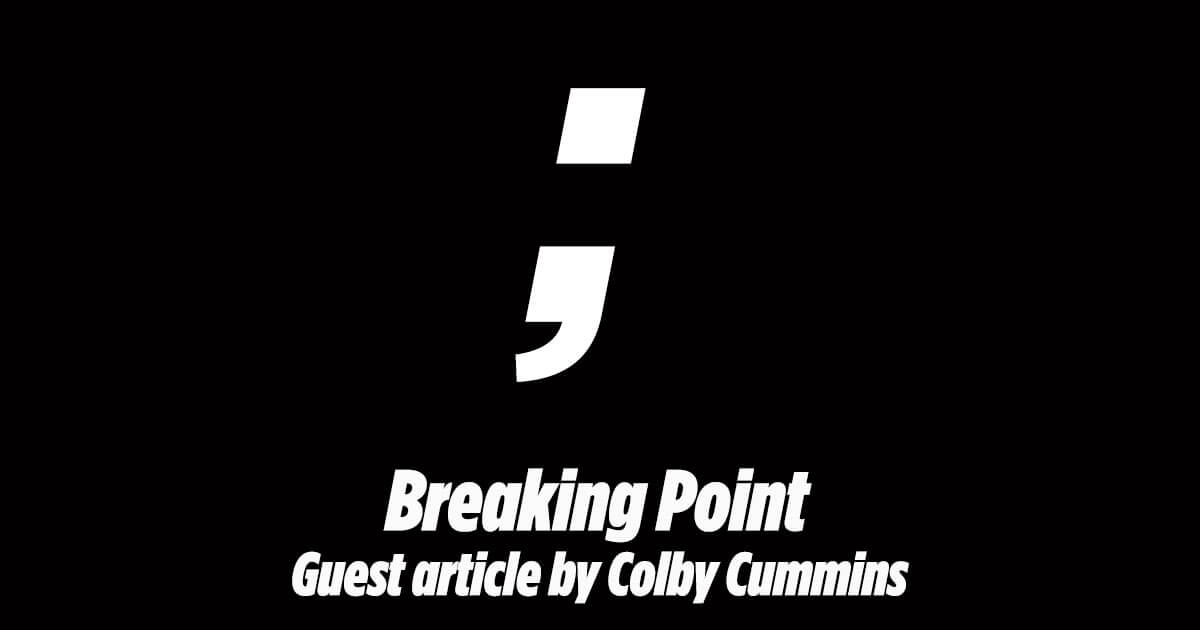 This time I’m taking a break from yelling at you egotistical flat bills and you washed up alcoholics who have no business sorting a show anymore, but don’t worry, I’ll come back to you.

It’s time our industry open up and have a serious talk about mental health/suicide awareness.

I’m not one to back down from a subject and this has been on my mind for a while and now is a time to bring it up. Harvest, sale season, fall majors, holidays, fall calving will take its toll on someone directly and indirectly.

We work in the industry that feeds and clothes the world. Yet everyone is coming after us for trying to kill them. Everyday we get up and go to work for 98 percent of the world who is trying to shut us down in anyway shape form possible.

Mental health is an issue that I take serious and want everyone to know that.

Depression makes people think and act different. They view the world differently and can’t openly express to the world how they think and feel because it’s not the norm. Those who suffer can walk into a room and be the center of attention and absolutely be coming apart on the inside.

The anxiety of being in a crowded space (sale or show) with really no way to escape. To be bombarded with a ton of questions when all they want is quiet or to be left alone so they can reset. Yes, that’s right, some people fighting depression need to be alone in order to come back to center because too much interaction can push them over the edge.

The phrase silence is golden for those really help. Sometimes its alone with music, a book, a movie or absolutely nothing to bring us back to a space of where we need to be.

Four years ago on October 28,2018, I hit my breaking point. Family conflict, cow deal that went south, work, moving to a new place on top of a 1000 other things that had been building finally broke me. I was found laying in my shower screaming I didn’t want to live anymore. I was ready to leave, and my mind was made up.

In that instant I saw my son standing there confused and scared and realized he was the semicolon in my life. For those of you who don’t know, if you see the semicolon on someone as a tattoo or anything else it’s a choice where a period could go. The end, but they chose to keep going. I realized in that moment I had to get help. I went to a facility for a few days and began the process I needed to cope and to live with what I had developed in my late teens, early 20’s.

“In a sick way I want to thank you for holding my head up late at night
While I was busy waging wars on myself, you were trying to stop the fight
You never doubted my warped opinions on things like suicidal hate
You made me compliment myself when it was way too hard to take” Blue October- Hate me

If you know someone battling depression, mental health, please for the love of God check on them.

You’ll never know what a phone call or text can do to someone.

Ask them if they are okay, and make sure they understand you’re there for them.

How many people have you talked to that decided to end their life and the majority of people say, “they were always so happy…”

The main thing is to learn to listen and empathize with someone. Don’t give suggestions if they aren’t asked. We merely want someone to listen to us, and no its usually not someone on the hallmark channel either. It can be extremely dark for you to listen to, but sometimes that’s our everyday outlook. This time last year there was a campaign going around about suicide awareness for vets. They are on of the highest categories on earth, why? Because if you can’t save their animal or pet, they are blamed for it. You guys put them on the pedestal of curing the world but sometimes there are things out of their control and yet people will run around and try to destroy their career because of things out of their control.

A lot of people with depression won’t open up because the public especially in our industry, shows it as a sign of weakness. I personally after every show I go to have this war in my mind of what I could have done that would have changed the outcome for my customers and my own son. I can’t tell you how many nights I spent on a washrack this summer on the verge of having a breakdown thinking,

Is what I’m doing right?

Are the guys we bought these from gonna be happy with the outcome or will they be willing to send or sell us more?

What is the one thing I can do to make sure I am giving everything in my body to make sure my child has the success we work for and want?

When the onset of mine in my 20’s hit, I self medicated because I couldn’t understand why my mind works the way it does, anything to make me go numb. Anything to make it not hurt as bad. I lost myself in work, I hated school because really none of it made sense. I don’t understand how I go into a social setting to help cure being alone/lonely and still feel the same. If you will listen to what people say they can be asking for help without coming out and saying it. Look at Keith Whitley, enough said.

One thing, to those fighting, break away from everything that fuels your anxiety and depression. Do it.

Leave the “friendships” behind. Let’s face it, this industry is nothing more than a bunch of used car salesmen that once they get what they need out of you will throw your ass to the curb and move on to the next.

When I say leave it, that’s what I mean, leave it. I don’t believe in killing with kindness, that’s not how I’m wired, when I’m done, I’m done. I encourage you to push away all the negative because, someones checkbook, backdrop pic or sold calf isn’t worth you going through personal hell for notoriety.

Sometimes its gonna be family that triggers your mental health issues. I’m sick of people saying “well that’s your family?” So? I have family members who won’t drive 7 miles to see us but yet have guys 300 miles away that will call just to check on my son. I don’t believe in pulling the “family card” and I don’t believe in the “we’ve been friends for so long” card either. You made your decision, you stand with it. I don’t wish ill will on any of these people but at the same time, I don’t care either what happens to them. Just go on live your happy life without me in it and I promise I’m not losing sleep over it.

It’s Okay to Not Be Okay.

I think now with social media we live in a society where no one wants to see the dark, because it’s a visceral reminder that we are all human. We all live in good days and bad days, don’t forget that, but take into consideration someone’s bad day can be darker than others and it not seem like it. If you know someone having a bad day, let them have it. Just be there for them, don’t pull the whole “suck it up and move on shit.” You aren’t helping. If anything you are backing up the fact that they feel no one is there for them making the event more prominent in their mind that no one does care.

Each person sees the world how they want to view it, and I know my concept of reality is vastly different than those around me. The best thing I ever did was start seeing a therapist. In the beginning I was scared shitless, not gonna lie. I had no idea what it was gonna be like. I was expecting it to be the scene like the movies “tell me about your mother…” It’s everything but that.

It’s an escape for me to talk and to get everything off my chest about whatever I want to talk about and guess what? They listen. They listen to respond to show different ways to cope. To agree, and to disagree but they also give you validation. I think deep down that’s what so many of us are looking for. Validation, respect, appreciation.

You might think it’s minimal, but the minimal can be what saves someone.

We Need You Here

I saw a phrase for a suicide awareness campaign that simply said, “Don’t leave we need you here.”

What a powerful message, there are those in this world that simply want you here.

Not to pull a leg or finish a top or a tailhead. They simply want you here. They need your humor, your voice, opinions, and overall YOU. I don’t know how hard I can drive this home, reach out. When people with depression start having an episode, pain and suffering take on a meaning that I really can’t explain and neither can they. I think is what is so hard about this, you can’t really communicate how you feel because its so hard to explain. If someone reaches out, be there. I want you to know that when someone calls you in that state you are the one they feel safe with. Don’t hesitate with it, you’re the one they chose to be their savior, their saving grace, their lifeline.

We honestly put so much pressure on ourselves in this industry.

I’ll never forget a phrase Brian Martin said on one of Hook’s podcasts “You’re only as good as the last one you won.”

Jesus did that hang with me.

Especially when you are in a position that its your job to make families successful. You can go to a show and the biggest asshole non-qualified hack can be on the mic and if you have a bad day you carry it with you. Why? Because you think, “they will leave… jesus I can’t even make them win in a swampass backwoods crack head invitational jackpot.”

It weighs and it swells in you why? Because it’s your job to make people win and you let them down. Don’t tell someone it’s not that big of a deal either because to them it is. I can promise you’ll be just as pissed when Petunia doesn’t win the country fair, Janet.

To close, please understand how important you’re mind is.

Understand you aren’t the only one fighting this. Keep finding the outlets you need to cope. Find those who can help you, seek the help that’s needed because I promise ya we need you here. For those who know me I have been extremely open about this endeavor the last few years. I remember one night as I sat in a friend of mines living room and I opened up he told me there was no way he could imagine any of this happening with out me being apart of it. That validation, in itself did so much for me. He is also one of my best friends as well. Always know tomorrow might be tough but you can push through it with the right help and the right people around.

The semicolon is a metaphor for suicide prevention.

Instead of ending a sentence, a writer can use a semicolon to continue on, and so too can an individual choose not to end his or her life, but continue on living.