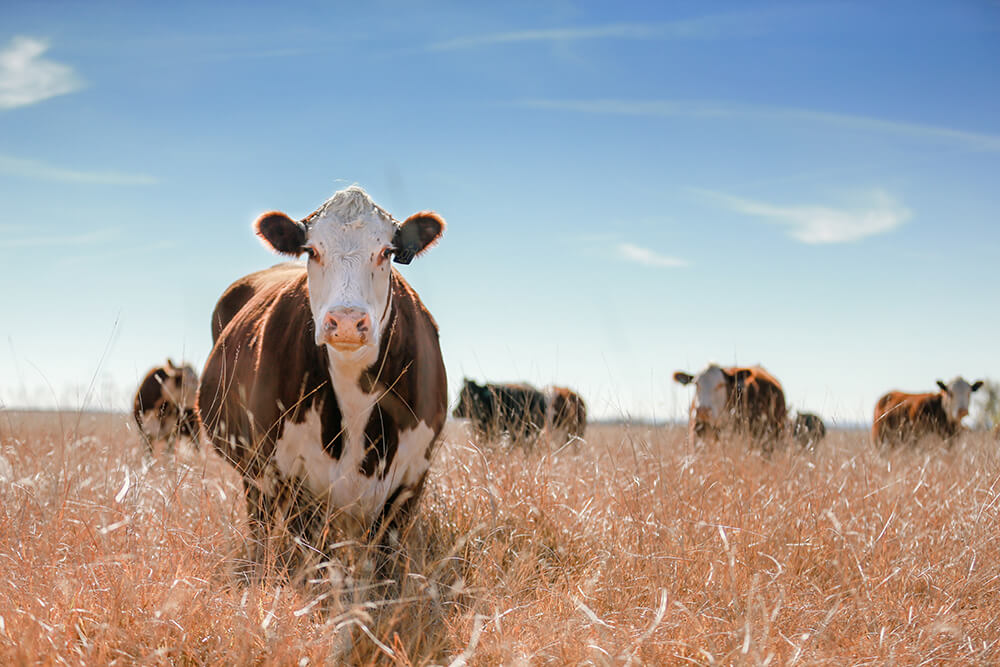 ***This feature originally appeared in our Winter Ranch House Journal. Never miss another editorial, subscribe to the magazine here.

Originally, Rubes’ grandparents purchased the farm in 1949 to raise Hereford cattle, wheat, chickens and hay. Almost 30-years later, Rubes’ father took over the farm and began raising Red Limousin and Angus cattle. “When my father passed away, I took over his cattle and wanted to try something different,” Rubes said. 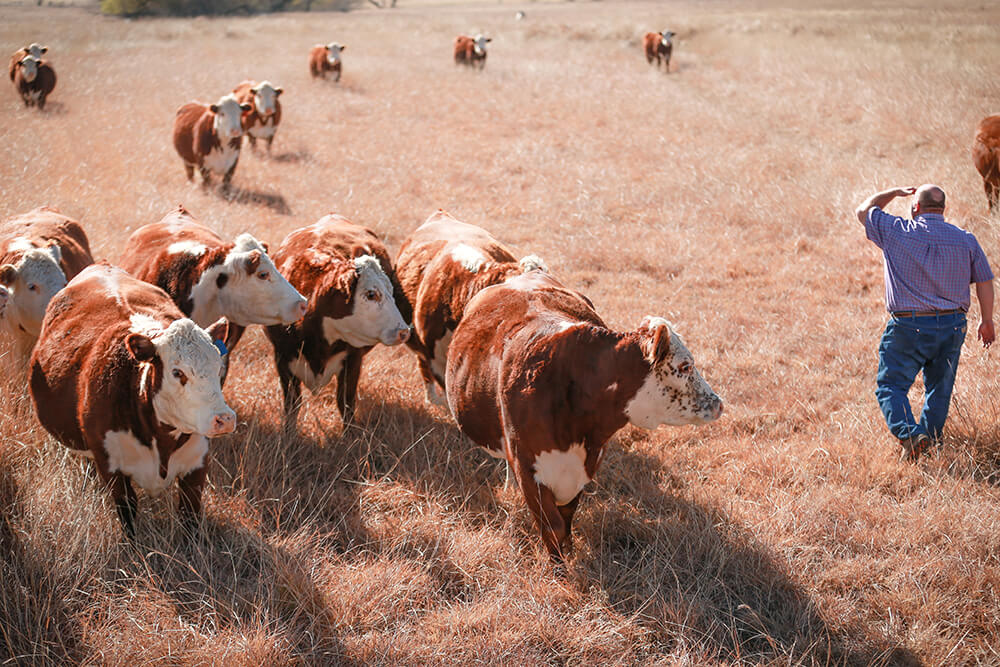 Amidst a strong appreciation for the family legacy and high expectations for the future, a Hereford program commenced. “I wanted to bring back the old traditional farm the way that it was years ago and just enjoy it,” Rubes said. “I even bought some chickens.”

To get his program started, Rubes said he knew he would need to seek advice from Hereford experts. “I called a college friend of mine, Robbie Schacher, knowing he was in the Hereford industry, and asked him to find me a small herd,” Rubes said.

Six Mile Creek Cattle Company’s first heifers came from Coyote Ridge Ranch. “Not long after, we wound up with a show calf from Hoffman Ranch,” Rubes said. Next, Rubes purchased some heifers from Dimitri Mataragras, of Iron Lake Ranch in Athens, Texas, which were exhibited at the Hereford Junior National Livestock Show in Kansas City and resulted in success for the first-timer.

“One guy that always offers wonderful advice and has become a good friend of mine is Dimitri Mataragras,” Rubes said. “It’s fun to listen to him because he’s always considering everything from the cow’s teeth to the soundness of their feet.”

Rubes said learning from others is a key component as he considers Schacher and Mataragras mentors in his Hereford endeavors. “I started taking a look at the other operations and noticed the improvements in their herds by raising different genetics, which peaked my interest to further my pursuit,” he said. 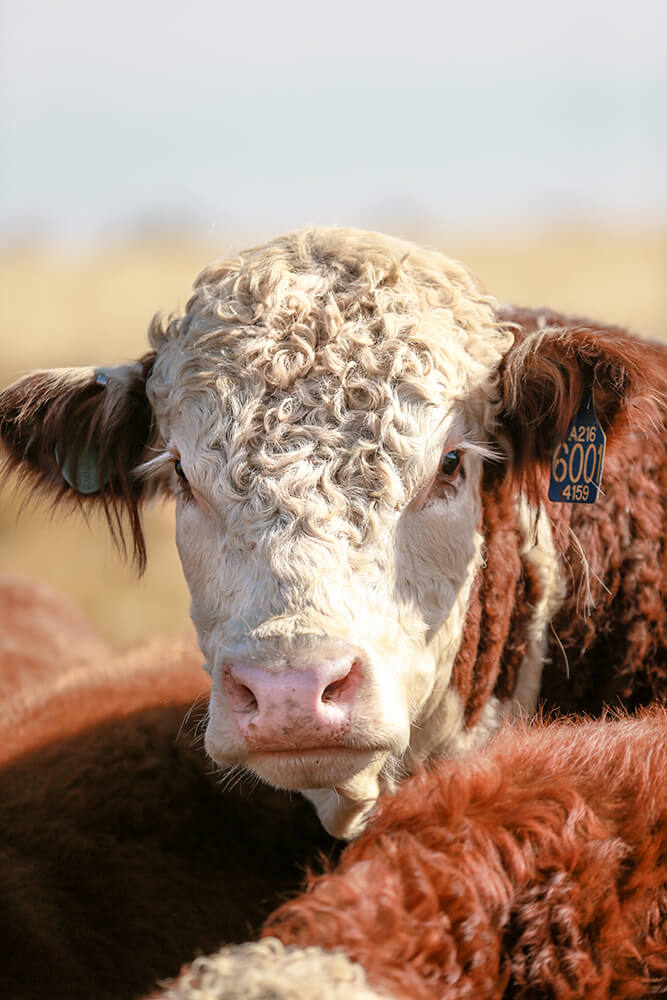 Colten Pratz, a student at Oklahoma State University, is also making an influential difference in the operation. “He’s a good kid with a strong interest in seeing what cattle are made of, what their flaws are and what their strengths are,” Rubes said.

Pratz said he met Rubes two years ago while on the livestock judging team at Redlands Community College. “He [Rubes] caught my attention with his people skills and drive to move forward,” Pratz said. Since then, Pratz said he’s witnessed substantial growth in the operation and looks forward to continuing his work with Rubes for many years to come. “It isn’t every day that an individual has the opportunity to work under someone who trusts his employees to take the correct actions to move Six Mile Creek in the right direction,” Pratz said.

“Mark and I share the same passion for the industry and strive to help youth better themselves,” Pratz said. Whether it be competitive show heifers or functional seedstock, Six Mile Creek Cattle Company strives to produce cattle to meet a variety of customers’ needs. As stated on the company’s website: “Six Mile Creek Cattle Company’s mission is to breed and produce superior registered Hereford cattle with excellent bloodlines for the beef market, show cattle and seedstock industries. Being a performance leader means we will achieve breeding excellence, industry-leading customer satisfaction and produce superior Hereford genetics.”

Candidly, Rubes said his goal is to produce competitive show animals while keeping the animal’s future in mind. “If a customer wants to show a heifer to be competitive in the show ring, to me it’s equally as important that show heifer turn into a nice cow that milks well and has a good udder,” Rubes said. “Or simply, a cow you would be proud to put in your front pasture.”

DEVOTED TO THE JOURNEY AHEAD

Committed to producing the highest quality bloodlines, the Six Mile Creek cowherd now consists of 100 registered Herefords. Rubes said he is excited about the future at Six Mile Creek Cattle Company. “We’re kind of doing what the big guys do, just on a smaller scale,” he said.

Mark, wife, Lori and daughter, Kassidy are not your typical stock show family. Outside of the showring, Kassidy is involved in many extracurricular activities like basketball, volleyball, cello and piano. However, Rubes said he has watched his daughter’s love for the Hereford breed grow through her success at the Oklahoma State Fair and Hereford Junior Nationals.

Ultimately, Rubes said he would like to start traveling to the North American International Livestock Exposition and Arizona National Livestock Show. “This way we can network and meet with other big producers in the industry,” he said. “Colton helps a lot because he is not afraid to approach somebody and say, hey Mark has something you need to check out.”

PATH TO THE FOREFRONT

The road to success for a farm or ranch of any size does not come easy. However, as digital media continues to dominate conventional communication methods, Rubes is doing everything he can to stay ahead of the curve.

Rubes said tools like Facebook are beneficial, considering Six Mile Creek Cattle Company is small and looking to compete with larger programs. “We just sold a show heifer to a family from Mississippi,” Rubes said. “They found us on Facebook.”

Rubes is dedicated to working with producers and customers in the cattle industry. “Through working with Mark I have gained a better understanding of how to effectively communicate with customers and how to set goals to move Six Mile Creek Cattle Company into a progressive operation,” Pratz said.

While operational growth and genetic improvements are priorities for Rubes, he said he takes each day one step at a time. “I didn’t grow up showing.I was just a farm kid,” he said. “I rode the combine while we cut wheat and fed hay to the commercial cows in the winter.”

When asked what he values most about the Hereford breed, Rubes quickly answered, “the people.” Six Mile Creek has over 6,000 likes on Facebook, dozens of positive page reviews and a growing digital footprint.

It is evident Rubes is making an impact on the Hereford breed and the people involved in it. “Whether you’re raising Shorthorns, Beefmasters or Herefords, the people throughout the agriculture industry are truly a fun crowd to learn from and be part of,” Rubes said.