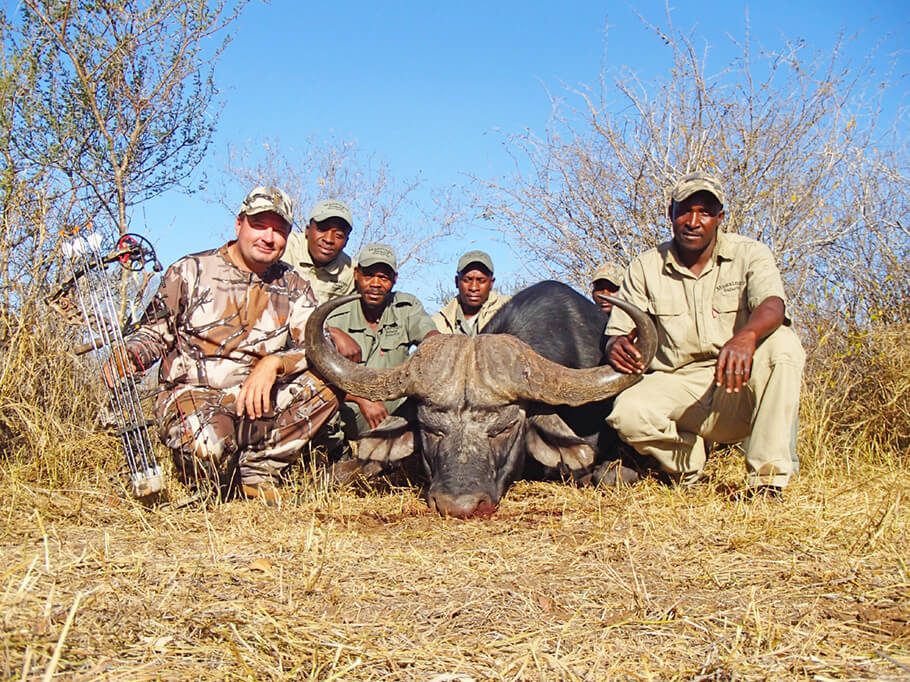 South Texas outdoorsman and 6th generation rancher, Kyle Hudgins, details an uncommon sense of adventure and a lifelong love for the sport and the outdoors while achieving the “Grand Slam” of sheep bow-hunting.

This article originally appeared in the Fall 2018 Ranch House Journal. 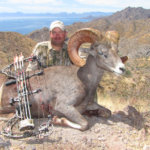 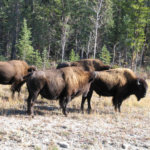 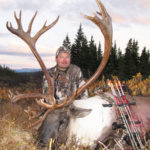 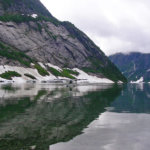 As an author, I have spent time with a variety of interesting characters. Weaving the fabric of their life stories into a readable design is the highlight of my life. I am always intrigued by the subjects of my stories, but after two hours on the phone with Kyle Hudgins I called every hunter I knew to brag. When they answered the phone I said, “Stop what you are doing. I have the coolest story to tell about a hunter I just interviewed.”

The Beginning of a Passion

Kyle Hudgins is a South Texas native, where he grew up as a working family member on the J.D. Hudgins ranch, and now continues to raise Brahman cattle and high quality F-1 replacements through his Reata Ranch. Kyle also owns Bayside Boat Barns, and uses Ranch House Designs to handle this boat barn marketing.

Born and bred in Bay City, Texas, this husband and father is honest about his beginnings. “When I was in high school, I was the definition of a homebody. I didn’t want to leave the house, much less the county.”

“I got into bow hunting with a friend from high school. I borrowed a bow, and I had my own camouflage clothes,” Kyle reflects. So financially, the barrier to entry to get started was low. “My first hunt I was sitting on a 2×6 I had nailed into a tree. I had bought a protein block and had placed it about where I thought I might want the deer, should there be any, to come up. And as dawn broke, there were eight does about 20 yards away. When it got bright enough to take a shot, I did. It was a textbook hunt.”
That was the fall of 1989. From then on, he was hooked.

When Hudgins graduated from Texas A&M University, a friend invited him on a Nilgai hunt on King Ranch. In a stroke of luck, as Hudgins and friend were walking into camp, two older gentlemen were on their way out. One of those men was Tom Hoffman, a prolific bow hunter who has been the recipient of multiple hunting honors and commendations. The two struck up a conversation.

Amidst tall tales about hunting in the mountains of Canada and the plains of Africa, the South Texas homebody found a kindred spirit. Two weeks later Hoffman mailed Hudgins VHS copies of a recent sheep hunt. Watching those videos sparked a fire, and from there Kyle’s hobby became an obsession.

The expert at anything was once a novice. This is especially true for Hudgins, as he retells his first major hunting expedition.

“A friend of mine knew a guy in Alaska. As a recent college graduate, the opportunity for what they called a ‘low-cost hunt’ was an opportunity I couldn’t pass up,” said Kyle with a laugh. The story makes for comedic gold. Two young men dropped off alone in the Alaskan bush for two weeks to hunt Caribou by a rogue bush plane pilot.
“At one point, we really believed we were never going to get out of Alaska. There were bush planes everywhere, but our guy’s was bright teal. You couldn’t miss it. We’d see a plane go by, hoping it was him, to easily guess it wasn’t.”

They didn’t get a shot at a trophy. The pilot eventually showed up. And after sleeping in an Alaskan airport for three days, they departed for home. Only to make an emergency landing in Seattle a few hours later. The date of their departure: September 11, 2001.

“We rented a car and drove 44 hours back to Houston. But we survived what we dubbed the worst hunt ever. Later that fall, I was watching a hunting show on television and saw a Caribou hunt in Quebec. Knowing that was the experience I wanted, I called the outfitter and booked a hunt. Taking a leap of faith that this would be a better experience.”

Entering the Big Leagues and Getting the Grand Slam

Following the initial experience in Alaska, Hudgins sought a professional outfitter and eventually found a lifelong partnership in Bow Hunting Safari Consultants.
“Bow Hunting Safari Consultants book around the world, and they have global specialists. They stand behind their hunts, and they are genuine specialists in bow hunting expeditions,” said Hudgins of the brand.

“My first hunt with them was a goat hunt,” Kyle reflects. “On my first day, two hours before dark, the guide suggested we go for a quick hunt. About 40 yards in front of us passes a billy and I took my shot. The guide kept going on and on about how this would be one of the top 5 goats in the world. I thought to myself, ‘man this guy is laying it on thick!’ I thought this was just salesmanship. But after we measured him, it turns out he was number 4 in the world. In terms of records and trophies, he is still probably the highest quality animal I have ever taken.”

After the experience with the goat, Hudgins wanted to go after sheep. The challenge with hunting he says, is that when you are young and physically able to go on some of these adventures—it is hard to be financially able. As you age, the challenge inverses. That is why the ‘Grand Slam’ of being a bow hunter who takes all four North American sheep is so hard to achieve.

“The Grand Slam consist of Stone Sheep, Rocky Mountain Big Horn Sheep, Desert Big Horn and the Dall Sheep,” Kyle explains. “The Dall Sheep is the least expensive of the four to hunt, and in my opinion really the most beautiful,” he said. “My experience with the Dall Sheep from start to finish was really all about luck.”
“I was sitting on the couch watching TV and eating Cheetos,” he begins, which as story beginnings go is captivating. “I tell you that because to hunt these sheep, you have to be in top physical condition, obviously I wasn’t,” he laughs.

“When my friend and the booking agency called, he tells me there has been a cancellation and if I can get a plane ticket to the Northwest Territories of Canada and be boots on the ground in two weeks the hunt is mine. Two weeks later I was in a helicopter headed into the mountains, and on the first day of the hunt we found my Dall.”

“Of the big four the one I really wanted was the Stone Sheep, and for my 40th birthday I booked that hunt,” Kyle reflects. “It remains one of my favorite hunts to this day. I spent 14 days in Northern British Columbia with a 70 year old wrangler, who I am embarrassed to say outwalked me every day,” Kyle explains with a laugh. “One day we got rained out, and spent the whole day making pancakes in the tent. After 14 days, I never took an arrow out of the quiver, but it remains one of the top experiences in my life.”

Kyle returned the next year, after the outfitter made good on a promise to bring him back. That hunt took Kyle 11 days to get a shot, but a 13-year old Ram hat the guides had nicknamed ‘Grandpa’ crossed his path and Kyle took him. The sheep had earned that name since it’s very difficult for a Ram to reach age 13. Grandpa had outsmarted the hunters and guides for years and they had never gotten a shot,” he said.

And with Grandpa, Hudgins became the 63rd person in the world to complete the Ovis Grand Slam with a bow.

In 2019, I anticipate Kyle will become one of fewer than 35 people to have successfully taken all 29 North American Big Game species. But if you ask Kyle what drives him, it isn’t about records or trophies, it’s about the challenge.

“For me, I bow hunt for the same reason why some people run marathons – the excitement. There is nothing like staring down a grizzly bear with nothing but a bow in your hands to really get your adrenaline pumping,” he says.

“Hunters are conservationist. They are the ultimate wildlife protector,” he continues. “We as hunters have to be more involved in the politics of hunting to secure the future of the sport.”

“Be a member of hunting organizations, and pay attention to anti-hunting groups and organizations,” Kyle advises. “The sad thing for me is that I believe hunters and anti-hunters share some common ground and could work together. But until we as a group can convince people that poaching and hunting are not the same thing, we really have an uphill battle.” Organizations he suggest joining who are doing good work in the field include Pope and Young, SCI, Wild Sheep Foundation, Boone and Crockett Club and the Dallas Safari Club.

Kyle’s great hunting stories are never-ending, like the Grizzly Bear and the Arctic expedition for Polar Bear and stories about hunting in Africa that rival Hemingway. In every story, one is dazzled by his enthusiasm of the sport and the depth of Kyle’s sense of adventure.

And his reply, shoots to the heart of who he is as a person.

“When my kids took their first deer. Man, there was nothing like it,” the voice of a proud father crows. He also talks about taking his kids to Africa for a hunt and to experience a broader world view. And as he tells another story that deserves a chapter in a book, you realize that the teenage boy who never wanted to leave South Texas has become a man’s man of the world. But his greatest accomplishments, no doubt will be sparking that passion in the next generation of hunting conservationist.
And with a story like his, it’ll catch like wildfire.