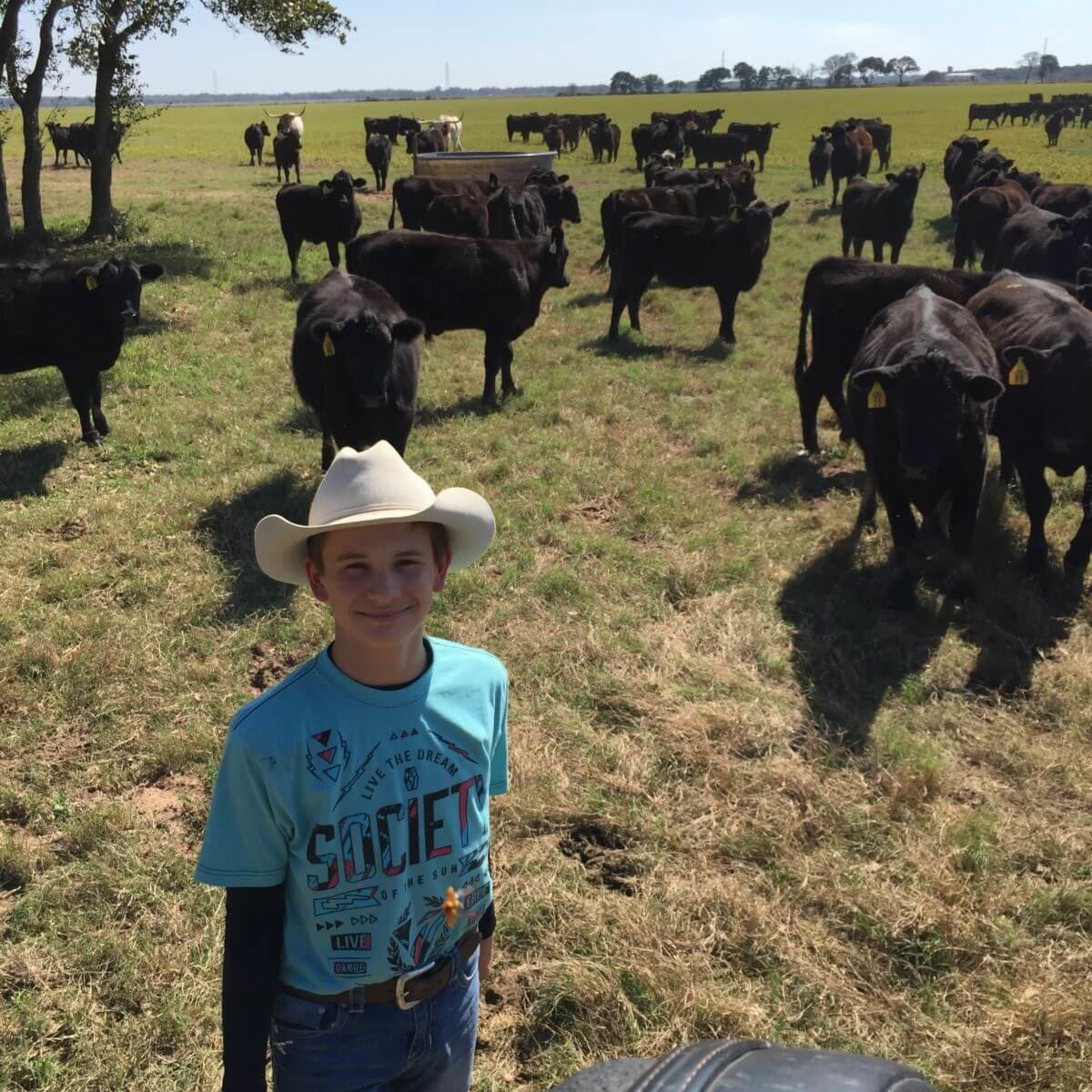 Edgar Erwin is looking to the practices of generations before to incorporate into modern practices to build his ranch and better serve the needs of families and restaurants.

The past can set us on the path to a practical future, when seasoned with lessons from generations before us. Edgar Erwin, owner-operator of Erwin Farm and Ranch in El Campo, Texas, uses this philosophy as he looks to previous generations for guidance on moving his ranch forward.

“There are just some things that past generations did right and we’re trying to bring that back,” Erwin said.

IT’S IN THE BLOOD

When you know Edgar Erwin’s story, it’s easy to see why he respects history and tradition like he does. An eighth-generation Texan, Erwin’s roots in the blackland soils of Southeast Texas run deep. His paternal ancestors can be traced to Captain Abner Kuykendall who, according to sources, crossed the Brazos River in the fall of 1821 along with his brothers. The Kuykendalls were the second family of Stephen F. Austin’s “Old 300,” the first 300 families to settle in Mexican Texas. Both the Kuykendalls and Erwins have been involved in farming and ranching ever since.

His father carried on the family’s deep agricultural roots by earning a Doctorate in Veterinary Medicine from Texas A&M University in 1971. His first job out of vet school was in El Campo, which is how the Erwin family established their roots in this gulf coast town. Fast forward to the 1980’s when brucellosis testing was at its peak and Erwin was able to assist his dad with testing from East Texas all the way to the Rio Grande Valley. It was during this time Erwin gained a newfound passion for animal husbandry and discovered he would eventually have a career of his own within the industry.

“I haven’t made a lot of money in it yet, but I sure enjoy it,” Erwin joked while reflecting on his journey to this point.

The agriculture roots are not just on his father’s side, though. Those roots also run deep on his mother’s side where his great-grandfather, Joe K. Williams, was instrumental in establishing the Angus cattle breed in Atascosa County and the Atascosa Livestock Exchange.

A TRADITIONAL AND UNIQUE APPROACH

Erwin remembers his grandparents buying cattle to feed out and butcher for the entire family to enjoy. In fact, he says he doesn’t remember a time his family had to purchase beef from the grocery store until he was a teenager.

“I wanted to get back to that old way of knowing where your beef comes from, who raised it, and knowing it was handled properly, which was a lot of the inspiration behind our business model and motto, ‘Real People. Real Beef,’” Erwin said.

Today, Erwin Farm and Ranch is providing customers with a unique, individualized experience when purchasing their beef. Customers have the option to visit the ranch to see firsthand how the cattle are cared for and to get to know the Erwin family beyond the customer-retailer level. Visitors can decide if they prefer their beef 100 percent grass fed or grain finished, and Erwin walks them through the process of deciding what cuts and aging process is best for their family and cooking needs. It’s this personalized and traditional touch that sets Erwin Farm and Ranch apart from other buying experiences.

“I want customers to know we are an open book,” Erwin said. “It says on our website anybody who wants to come over can. They don’t have to buy anything. They can look at our operation to see how we’re doing things, how we’re handling the animals, see where they are grazing, and hopefully get a sense of ‘this is the right way to do it.’”

Erwin is not against feedlots because he owns a construction company that builds grain elevators, which ultimately supplies grain to feedlots. However, he discovered there was a market for grass-fed beef in his area, and in regard to tradition, he personally believes this is how nature intended for cattle to be raised.

The demand for Erwin’s approach on beef production has only continued to grow, so he has taken two approaches to have a steadier supply of beef for families and restaurants. First, he has partnered with several reputable Texas ranches who share his same beliefs in how beef should be raised. These ranches help grow out the steers to their market weight and are then transferred to the Walhalla Valley Smokehouse and Meat Market, a USDA certified packing plant. Here the steers are butchered and then dry-aged for 21 days, which Erwin states “makes a huge difference in the tenderness.”

Additionally, he does not own any bulls or cows, which increases his carrying capacity and allows him to focus his efforts on steers purchased from a fellow rancher and friend.

Ask any farmer or rancher what it means to raise their family on the farm and you can bet they will all have the same response, “everything.” Erwin, who is raising his son and twin daughters on the ranch, shares that same exact sentiment. When it comes time to process steers or do any other major projects on the ranch, the whole family, including the kids, are involved. It’s through the long days and hard work that Erwin hopes his kids learn self-reliance and critical thinking skills and gain an appreciation for a good day’s work.

“I want the ranching life to be a great life for my wife and kids because I love it,” Erwin said. “I would like the ranch to be a place they can come back to after college if they choose to or be the place where they learned a good work ethic to do whatever makes them happy.”

Of course, there are lessons learned on the ranch Erwin doesn’t expect. Recently, that lesson was strength training. His son started eighth grade football late in the summer and the coaches were blown away by his condition.

“The coaches were asking me what I had been doing with the kid all summer to which I responded ‘working on the ranch…what do you mean?,’” said Erwin. “They were just blown away because he was in better shape than any other player on the team.”

Part of being a good business owner is knowing where your strengths and weaknesses are. Knowing that marketing is not his strong suit, Erwin reached out to Ranch House Designs to help him build his brand.

“I know what I’m good at and I know what I’m bad at, and I’m not good at technology and marketing,” Erwin said. “If it wasn’t for Rachel and her group, my website would be horrible, and we would not have had the sales we have had to date.”

Edgar Erwin is a perfect example of finding the middle ground between looking to the past and looking to the future to build the Erwin Farm and Ranch brand. From paying tribute to his ancestors by using some of their practices to partnering with other ranches who share the same philosophy to inviting customers to tour the ranch, Erwin is able to create a unique finished product.

“It’s taking the best of both worlds and combining them to have a premium product at the end,” Erwin said.

To learn more about Erwin Farm and Ranch or to inquire about availability and pricing, visit www.erwinfarmandranch.com.