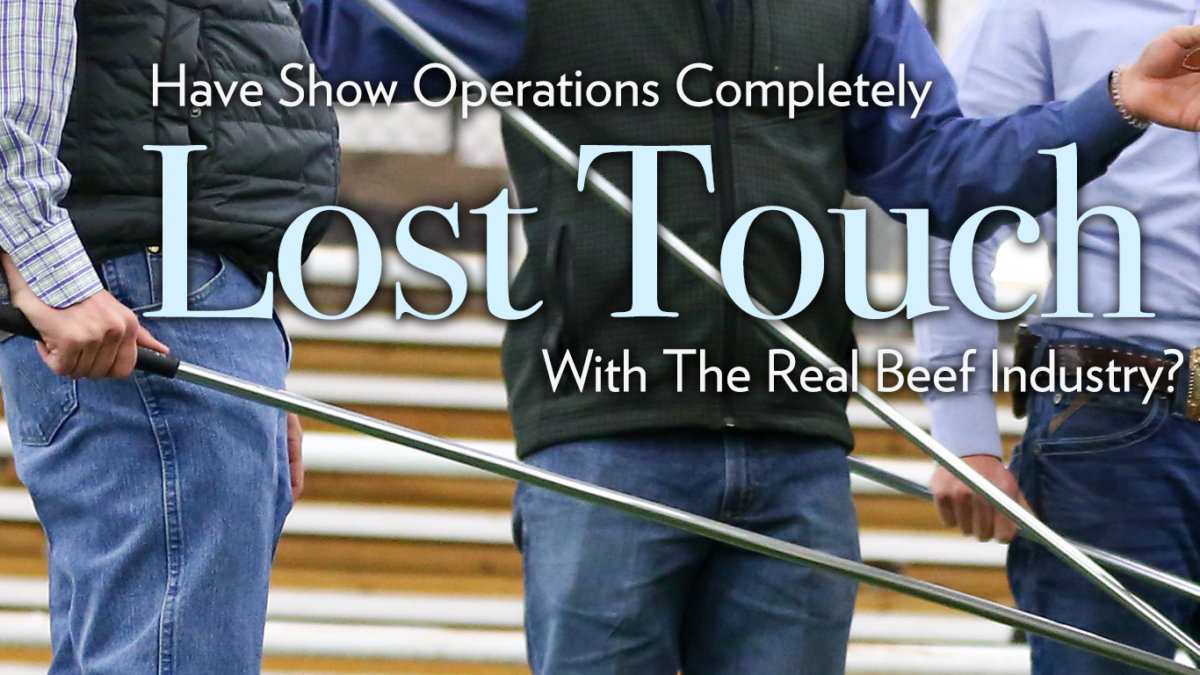 “Congratulations! Eileen got 2nd in class!”

That was a text I got from a friend at a show that I didn’t get to attend. He was texting me show results.

I was happy and asked how many were in the class. He said 2.

I laughed out loud and texted back, “You’re such a nice friend. You put a total positive spin on that. You could have easily texted, ‘Eileen just got dead last in her class….”

It’s all about the perspective right?

Across the cattle show circles, open show numbers and even some jackpot numbers were down this year. In some cases, class sizes are 1 to 5 head. Some divisions only have a single entry or two head. So, no matter what you’re getting reserve division champ.

Or, last place, depending how you look at it.

Problem is, social media isn’t reporting the class size. So, to the average viewer, people just see a banner or a rosette.

And it’s gotten folks talking. And not necessarily in a good way. People are seeing winners in social media and asking “How did that calf win?” Or “How did the judge miss those terrible feet?”

It’s not necessarily the judge missing these things, it’s more that there was nothing else there at the show to use.

So, that’s what wins. And then the judge has to get in the backdrop photo with it.

The disconnect from showing and real world is an age old debate. But, is it at an all time high?

I had a call from one of my most respected friends from another breed. He was recapping a conversation with a friend from a 3rd breed, discussing how are we at the point where people are completely ignoring basic production agriculture defects simply to chase a banner?
Here’s what he means, seeing show cattle with:

I laughed and agreed with him. These were just four known examples of cattle showing currently on the show road – and sometimes winning – that had all of these above glaring errors. There was just nothing else at the show.

I made the comment that some of the cattle I’ve seen at shows lately would be in my beef program, but here they are showing…and in some cases even winning a reserve division champion because; well, they’re only 2 head in the division.

So who’s to blame?

This is a tough one. Brandon and I were discussing this and he asked, “So what should a judge do? Just give the animal the gate and not place it? Even if there’s only 2 in the class? What if it’s a single entry? What if it’s the only calf in that division?”

In theory, that sounds good.  How else are people going to stop the madness? As long as they’re getting a ribbon for it they’ll keep on showing these poor quality cattle. Someone needs to make a statement, right? Judges need to be more critical.

Nope. It isn’t that easy.

What happens when the showman showing the heifer calf who’s got the worst toed out feet in the history of cattle is a sweet little 10 year old? Showing her first show heifer Susie that she loves. Her family aren’t ranchers, and they’re trying showing for an activity for their family. They paid $10,000 for the calf because it supposedly comes from a big name seller and they thought – ‘hey, if it’s worth $10,000 surely it’s a winner!”

They don’t know about proper feet and leg structure. They’re there for the experience. You gonna give her the gate and humiliate her on the mic for her calf’s front feet?

So then, has showing just turned into a “let everyone win something” kinda deal?

At some of these little shows, yes, I think it has. I’ll be honest, when my daughter first started showing as a 9 year old and we went to jackpot shows to practice, I was looking for the SMALLEST possible shows so she could get in the ring and out of the ring with a positive experience, and yes maybe a blue ribbon.

And, that’s okay. The more people that can have an enjoyable experience, the better. Especially if we are using shows for the tool of “building up young people” or “teaching responsibility to young people.” In that case, honestly I’m fine with the whole ‘everyone is great’ thought process.

But ultimately, every show animal needs to go into production at some point.

I mean, unless you’re raising a petting zoo instead of a ranch, which some folks do. But, in the real world, animals can’t stay in a show barn all their life – or at least they shouldn’t. Unless again you’re running a petting zoo.

And that’s where I think it’s on the grown-up breeders need to do better.

The responsibility of the breeder

To me, the people who need to really “check” themselves are the breeders. The ranches and breeders who set the standard for the rest of the breed or the high level beef industry. The people who sell and market cattle to others.

It’s called, thinking beyond a small dirt show ring and into the real world beef industry.

And, it begins at the basic production level of every herd.

Culling can happen at any stage and needs to happen continually within a herd. If an animal isn’t able to be functional, and do it’s basic job, then it doesn’t need its genetics further propagated or sold to another breeder or junior. And it definitely doesn’t need to be a show animal.

Here are some scenarios:

Is this the tipping point where shows turn completely into a hobby?

I heard it said recently that it’s actually a bad idea for open show ranches to show in todays show ring climate because it’s so far off track from the real world.

I’m 43 years old and I’ve heard that statement for as long as I can remember.

Do I personally think the show ring is off base from real world ranching? Yes, as a whole. Absolutely.

But, do I think there are still a handful of true breeders out there who care about structural soundness, fertility, reproduction? Yes, I do.

But the number is few and far between.

Everyone else, I don’t think they care. I think they’re just looking for a ribbon. Or the experience of showing.

And, that’s fine. Everyone is welcome and we want more and more folks getting into the cattle business.

But I have this to say to you: think beyond the show ring.

My family and I are very successful at showing. We’ve bred more national / international champion Brahman females of the last decade than any other ranch. As I sit and write this blog, I’m literally in a room where every available space on the wall is covered in show banners. I love showing. I’m definitely not one of those “I can’t win in the show ring so I got bitter and now I complain about it” type persons. I like to show and I like to win.

But, in order to be truly long term successful in SHOWING you have to be focused on production.

Let’s face it. Showing is political.

Even though the industry is working towards more fairness and transparency in show ring ethics, I’d venture to say at least half the time show placings come down to who you know and how much you’ve spent. Its getting better, but that’s still a factor sadly in some cases.

So, you can’t put all your eggs in the show basket.

Because in the history of showing there’s never been an animals that’s ALWAYS won. Even the absolute best ones get beat sometimes. And that’s okay too.

Today’s show ring is very political, frivolous and completely based on one persons opinion on that day. Everyone knows this when they pay their entry fee.

That’s why you’ve got to select your show animals with their true beef production value in mind. Otherwise, you’ll be one of those ranches that’s in and out in 7 years or less, and we don’t want that.

For those of us like my family who make our living raising and selling to those who want the experience —- we MUST do right by others, especially the new folks. We must self regulate, we must educate, and we must set new breeders up for success. The industry depends on it.