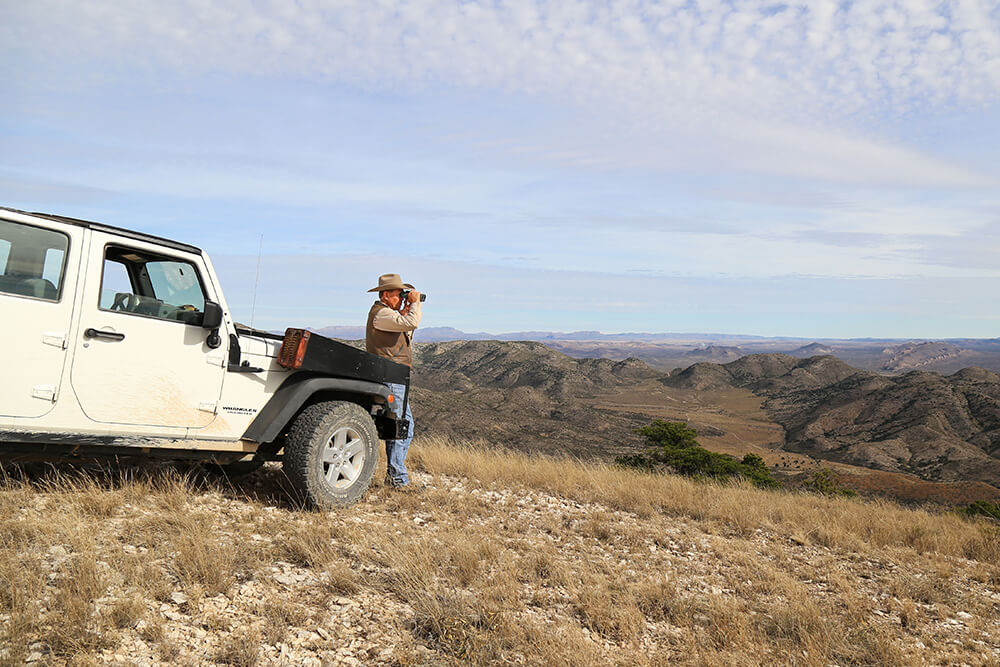 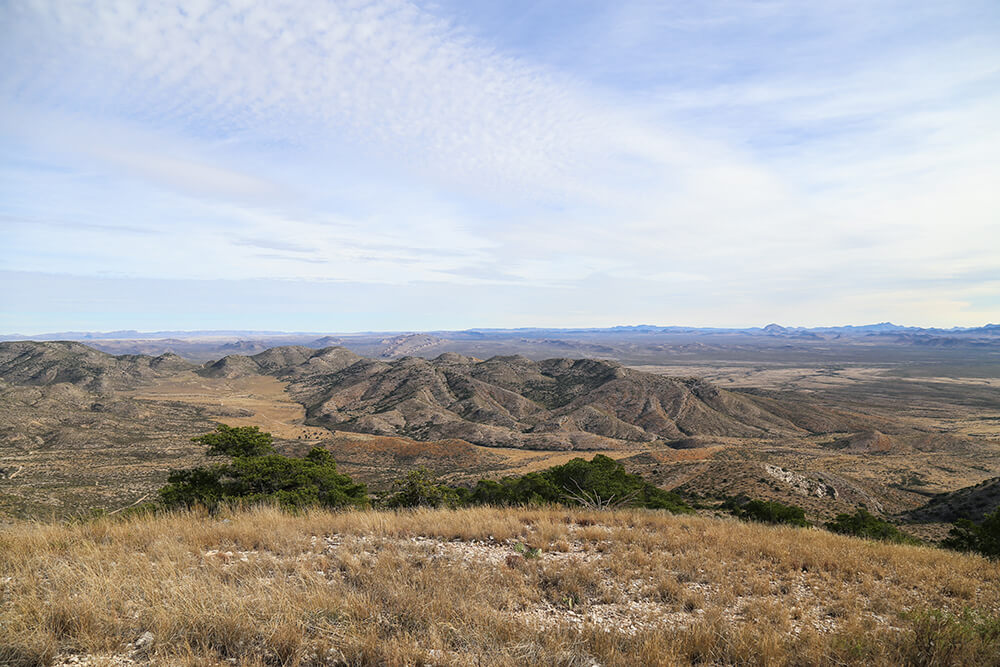 Owned by J.P. Bryan, a Houston businessman, the ranch is home to many different hunting species, including elk, mule deer, whitetail deer, aoudad, javelina, feral hogs, turkey and blue quail along with predator species like coyotes, bobcats and mountain lions.

Bryan purchased the 30,000 acre property a little over 20 years ago. Since then, he has put tons of effort into preserving and improving the natural habitat, thus allowing animals to flourish on the ranch. In the last five years, Bryan and his family have hired Hayes West to manage the Maravillas ranch. Hayes, his wife Michelle, and their three children call Maravillas home. Along with Maravillas, Bryan also owns the Chalk Draw ranch, which borders the property.

As a local west Texas resident, not many understand the area and the land better than Hayes. “I grew up in Marfa, Texas and have worked on ranches in this area my whole life,” he said. “This is the first time however, I’ve worked on a ranch dedicated solely to hunting.” 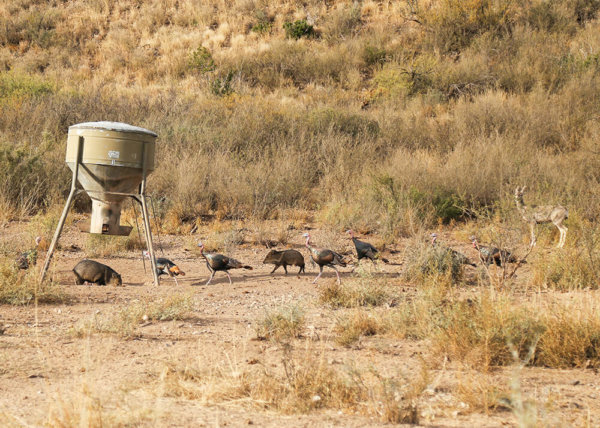 Hayes said he enjoys the country and the wildlife, but one of his favorite parts of the job is helping other hunters. “I enjoy getting a hunter his first mule deer or west Texas elk,” he said.

The property is beautiful and very active in the fall. It’s the perfect time to observe the different species that inhabit the ranch. If you’re visiting in the late afternoon however, Elk can be more difficult to locate. Hayes said it’s common for elk to return to the mountains once temperatures begin to increase in the late morning.

Situated in close proximity to the Big Bend National Park, the rocky landscape is filled with arid, desert-like plants. However, it hasn’t always looked as stunning as it does now, according to Hayes. Bryan, who has a natural born love for land and the outdoors, made it a priority to improve the property through clearing the ranch of brush and promoting the growth of native grasses. 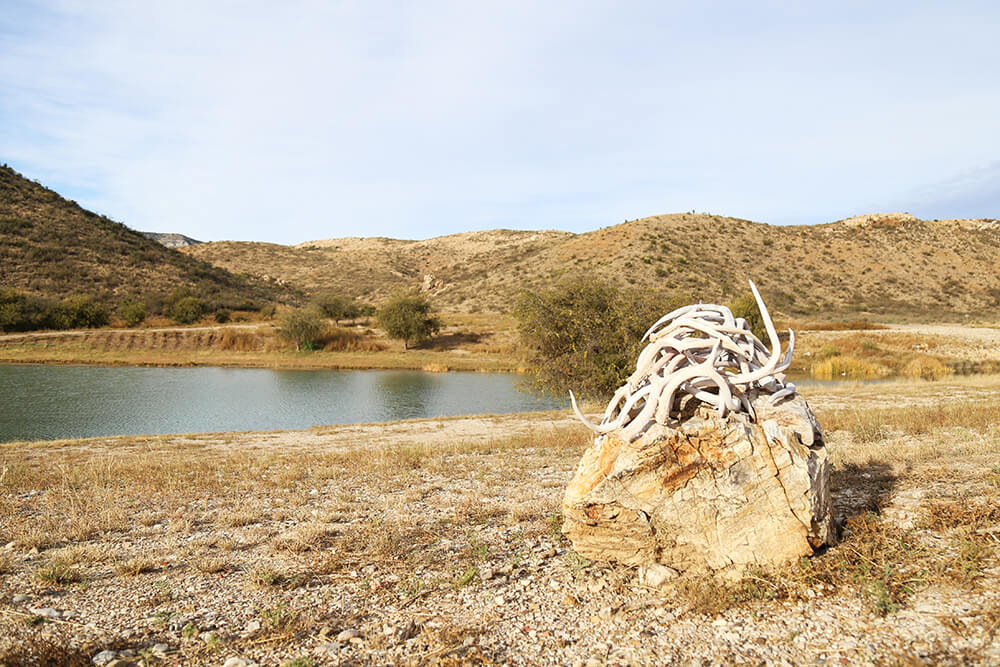 “When J.P. first bought the property, he spiked the land to help get rid of brush like greasewood and cedar,” said Hayes. “This really allowed for native grasses to develop and take off.”

The ranch was careful however, to keep brush present in the draws that wind through the property. “It’s important to make sure you keep some brush for wildlife,” said Hayes. “A lot of strategy has been put into making sure this property is well suited for sustaining wildlife.”

Other efforts implemented by the ranch included installing watering systems and protein feeders. These efforts allow animals to thrive without having to travel far distances, thus increasing the likelihood of hunters being able to experience a kill like a mule deer or elk.

A DIFFERENT KIND OF HUNTING EXPERIENCE

Hayes said Maravillas is different from many Texas hunting ranches in that they do not use or rely on high fences and almost all hunting on the property is done by buggy. “I have a 70-year-old gentleman that loves to hunt here,” he said. “At that age it can be difficult to get around. By using a buggy to transport hunters, I’m able to get them much closer to their targets.”

Trophy mule deer cannot be harvested on the property until January, and the ranch only allows for two trophy elk to be killed per year. “We like to be conservative with trophy hunts,” said Hayes. “We’re not in it to be greedy. We consider the animals and allow them time to breed and reproduce.”

The ranch offers accommodations to hunters, including lodging for up to 12 visitors, a fully-stocked commercial kitchen, a large storage cooler, a processing station and an on-duty cook. 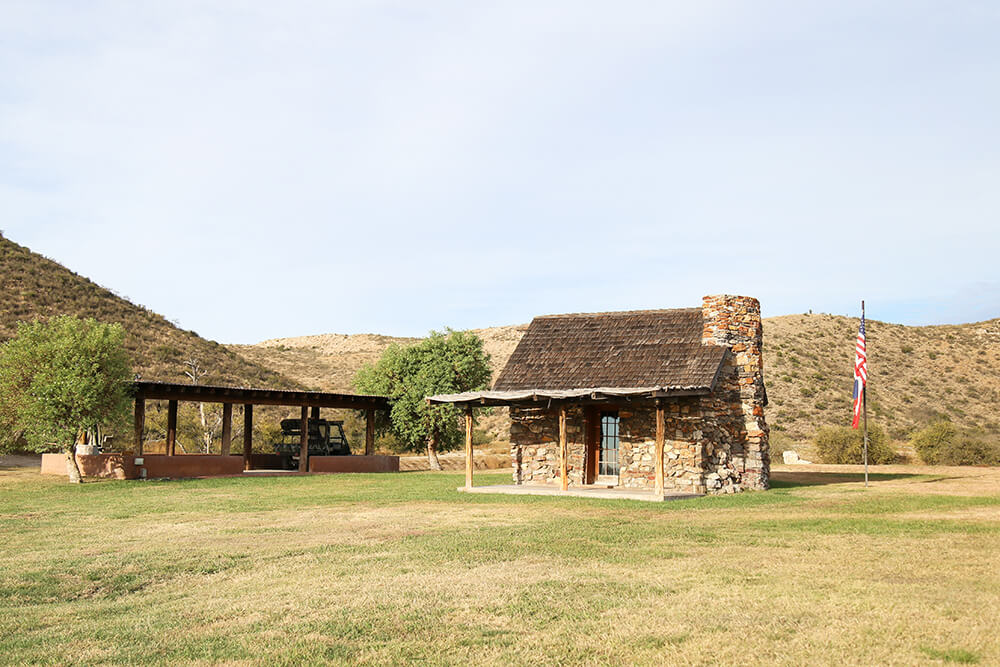 The hunting lodge has several comfortable sleeping options, hang out areas and enough bathroom space to accommodate large parties. Hayes said the sitting porch is a favorite spot among visitors. “People love to sit here, sip their coffee in the morning and watch wildlife come up to the pond and feeders,” he said. 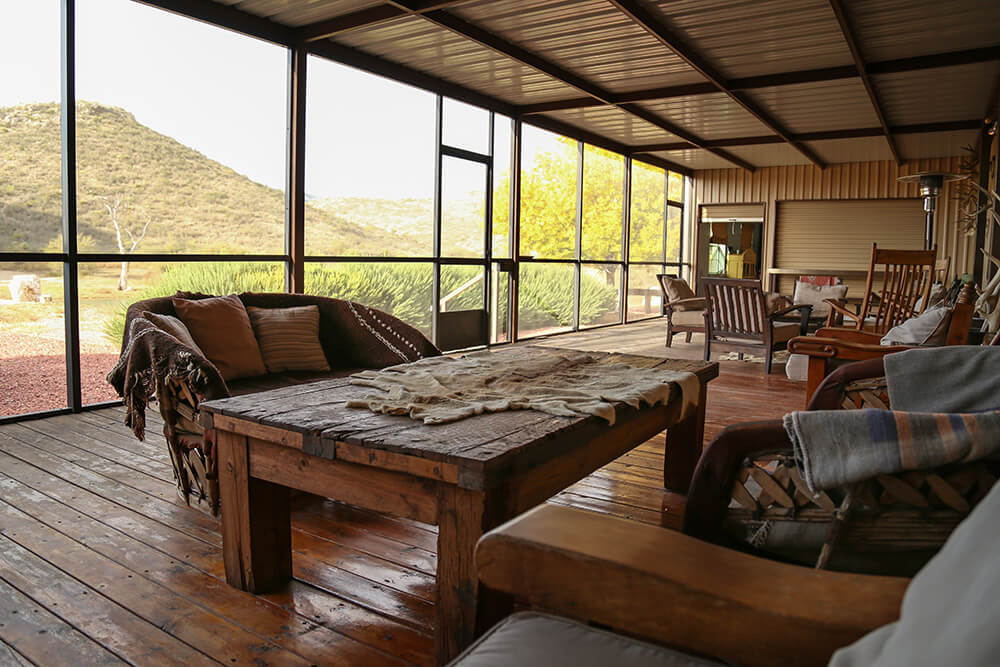 Marathon, the nearest town, offers one-of-a-kind dining and lodging as well. Home to around 300 residents, Marathon is known for its small town charm and the world famous Gage Hotel. Hayes’s wife Michelle works at the hotel as the venue’s event coordinator.

Not only does Bryan own the Chalk Draw and Maravillas Ranches, but he also owns many of the buildings and businesses in town, including the Gage Hotel. “If it wasn’t for J.P. investing in this town and really putting it on the map as a travel destination, I’m not sure there would be a Marathon, Texas left,” said Hayes.

Hayes has relied mostly on word of mouth to book hunts at the ranch. Over the last five years he has attended several Texas Trophy Hunter conferences and feels that through greater visibility he has been more successful booking larger trophy hunts.

The ranch has also employed the help of Ranch House Designs to market hunts. “We’ve had a few inquiries from people who have viewed our website, which was built by Ranch House,” said Hayes.

Although the ranch mostly sees in-state hunters, Hayes said he is always looking to welcome more out-of-state visitors to Maravillas. To learn more about the ranch and to get in contact with Hayes about booking a future hunt, visit maravillasranch.com.

Editor’s note: If you’re planning a visit to The Gage Hotel, try a cup of joe at the V6 Coffee Bar and enjoy a five star dining experience at the White Buffalo Bar next door.