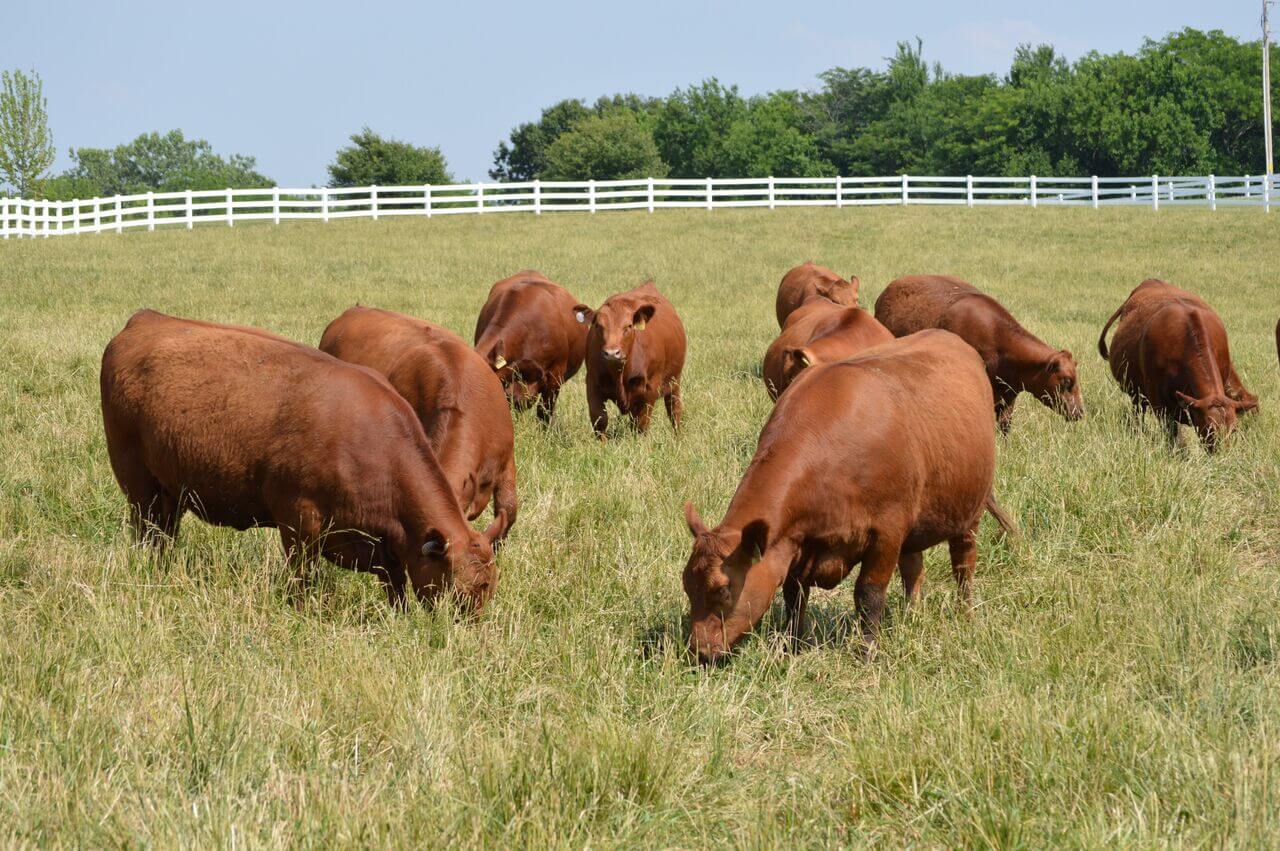 This article originally appeared in the Fall 2018 Ranch House Journal 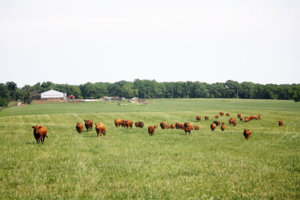 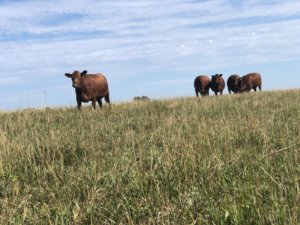 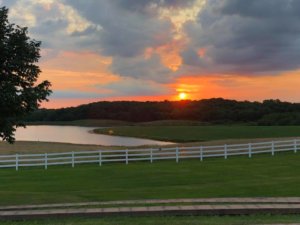 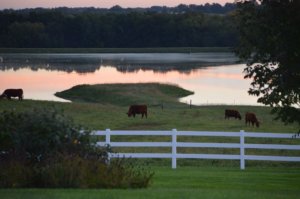 In 1966, a legacy began when Warner Bachman started Bachman Cattle Farms in North Missouri. Truly progressive and ahead of his time, Warner recognized the value that artificial insemination played in producing quality genetics and became the only registered Red Angus operator in North Missouri.

“I grew up helping with our farming duties, tracking heats, and watching my father A.I. the cattle,” said Scott, Warner’s son. “We did a lot of breeding with Choctaw Chief 373, a herdsire with plenty of history in the Red Angus breed.”

Scott Bachman developed a keen eye for business, working both in the United States and in the Netherlands in the cable television and technology industry. His keen eye for business and decision making, combined with a strong work ethic, is something he credits from working on the farm as a youngster. In 2004, Scott, his wife Sue, returned from the Netherlands and moved to the family farm. After buying out his father, Scott set out to rebuild Bachman Cattle Farms into its current operation producing top-end Red Angus seedstock.

“At first we started with commercial Red Angus females, then investigated and selected the herdsires and donor cows that would help build a new generation of Red Angus seedstock animals,” Scott said. “We now refer to those animals as ‘Bachman Bred’ and are developing our BACH brand. Initially, we ran about 85 percent Red Angus and 15 percent Gelbvieh-Balancer, but we now only focus on Red Angus seedstock.”

In 2010, Scott and Sue purchased their first herdsires from Beiber Red Angus Ranch. In 2014, two Bachman herdsires were offered in the Accelerated Genetics catalog. Since 2014, Bachman Cattle Farms has invested in additional herdsires to form a core group of some of the best Red Angus genetics available.

After evaluating various seedstock providers, Scott selected Bieber Red Angus, Ludvigson Stock Farms, and R.A. Brown Ranch as the foundation of their genetic base.
With the combination of herdsire and donor genetics, Bachman Cattle Farms strives to develop a line of BACH-based progeny that puts BACH cattle in the top-end of maternal and herdsire pedigrees.

Scott has always been a fan of using data and numbers to help make sound business decisions. He’s applied this to his cattle program by aggressively developing an embryo transfer program that advances their program philosophy and goals of “3P- 75/75/35.” What this means is that Bachman Cattle Farms aims to develop superior progeny that met the three P’s of phenotype, power, and performance, in combination with 75% of their seedstock having at least 75% of their EPD base in the top 35% of the breed.

To the Bachmans, it is important that they produce cattle that not only look good and are structurally sound, but also perform well and have the numbers to back it.

According to Scott, BACH bred cattle need to be able to walk the walk and talk the talk.

BACH Mr Mighty Mo F035D is a great example of this formula at work. At two-years-old, he ranks in the top 5% of 12,489 animals evaluated in the Red Angus registry and 75% of his EPD base is in the top 20% of the breed. He is the first BACH bred herdsire that is CSS certified to sell internationally and already has a contract to provide semen to a group of Red Angus breeders in Australia.

Even after the initial criteria are met, next, the Bachmans evaluate disposition. Red Angus are typically known for their good disposition, and it’s imperative to the Bachman’s that their cattle continue that tradition.

“We breed and cull hard for disposition,” said Taylor Croy, operational manager at Bachman Cattle Farms. “I can walk out to the bull development pasture, sit on the ground, and feel 100% comfortable taking pictures right next to the bulls. Their disposition is unbeatable.”

Because North Missouri’s midwest climate is a mixture of hard, cold winters and extremely hot and humid summers, it is important that their cattle can also grow hair efficiently and be able to shed it off in two to four weeks to acclimate to the summer temperatures.

With both a spring and fall calving herd of about 100 head in each group, 80 percent are registered Red Angus while the remaining 20 percent are commercial Red Angus cows that are used as recipient cows in their ET program. At the end of each calving season, almost 92 percent of the progeny are 100 percent Red Angus seedstock calves.

Bachman Cattle Farms also has two cooperator partnerships where BACH embryos are implanted into recip cows and raised elsewhere until weaning. After weaning, Bachman takes possession of the ET calves. This has worked well for their operation and they’ve developed, in relationship with TransOva Genetics, around 600 embryos throughout several years.

Each of their herds is grazed on 10 to 40 acre paddocks and rotated as needed.

“We use a variety of red clovers, ladino cloves, birds food trefoil, alfalfa, timothy, and orchard grass,” said Scott. “We cut and silage wrap wheat, alfalfa, and some clover-based forages to build mixes in the winter for feed. Because we are raising our own bulls now, they get a heavy forage-based diet to keep them fescue adapted while also targeting a growth of about 3.5 lbs/ day.”

Scott is also thorough in his data-intensive herd health protocol. Each of their calves, bulls, and cows are vaccinated, and all vaccinations and treatments are recorded in their CattleMax software platform. For heifers, the Bachman’s follow the Missouri Show-Me Select protocol.

It’s no doubt to anyone who’s been a customer of Bachman Cattle Farms that their reputation lives up to the hype. BACH bred cattle have been sold in Missouri, Oklahoma, Kansas, Nebraska, Iowa, Illinois, Tennessee, Texas, New Mexico, and California.

With no plans to slow down anytime soon, they are hoping to add an e-commerce tab on their website and gain further access into Australia. The Bachman’s are grateful for their partnership with Ranch House Designs and the role the agency has played in their marketing platform.

“Ranch House Designs helped us develop a branding image – a common look and feel- that sends a consistent message across all our media platforms,” said Scott. “They have been integral to us in the marketing realm.”

At the end of the day, Scott is happy to continue the legacy his father started all those years ago. Today, at 91-years-old, Warner still visits and is involved at the farm each day.

Both avid Christians, Scott and Sue are proud of their faith and hold Christ at the center of their lives and operation. They feel blessed to tend to cattle and provide a great source of protein that feeds His people. They want the same faith that promotes integrity and honesty in their personal lives to run their business as well.

Just like the BACH bred top-end seedstock they produce, the Bachman’s also walk the walk and talk the talk.