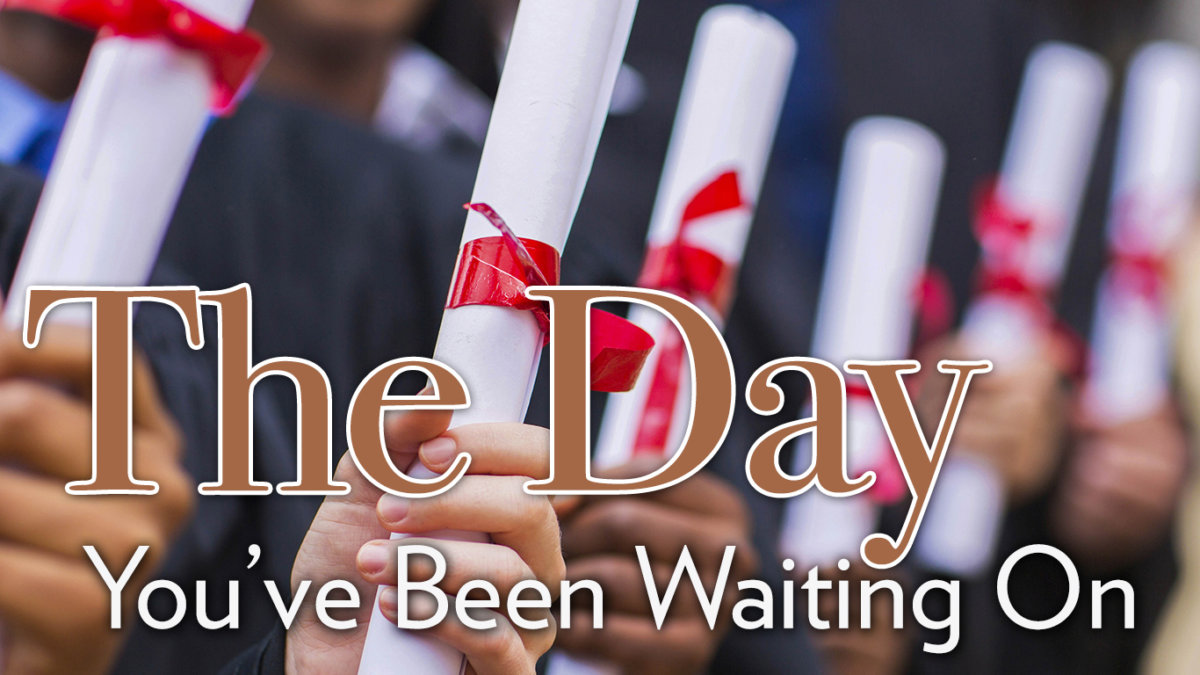 It’s the time of year so many look forward to, so many fear, and parents dread.  Graduation invites have started hitting our mailbox like so many others. I think maybe for stockshow kids there is a transition but maybe not as much as what the other kids are going to endure.

Many of you are going on to judging teams, show teams, or programs where so many can see each other on the regular, and that gives a strange sense of okay for the time. It’s the social media posts of “lasts” for kids. Last week and last day approach us rather fast. Time does fly and as a father I can tell you don’t take anything for granted, time does go by quickly and regret should not be in the rearview.

I’ve always had a torn feeling of high school. I was somewhat of a loner, my friends lived off so jackpot season was the best time of year because you got to see those people and essentially be with your kind. I hope as a senior you enjoyed it. The ups, the downs, the good as well as the bad because quite frankly it was just a taste. You guys have the world at your finger tips and within the grasp of anything you want and don’t forget that. In a few years.. maybe a few months, no one is gonna remember who fumbled the ball in that game, who wasn’t on this council, who didn’t make state whatever, and I’m saying this for this reason… it’s the past. Those who can tell you all those details, well you know that’s when they peaked and they are forever locked in that window of time. If there ever was advice I wish someone would have given me or explained to me it was this:

Your graduation is a stepping stone. Not permanent and not forever. You have the opportunity to change your entire future or you can decide to forever stay in the year you graduated. Your life, your worth is not determined now by who you did or did not sit with during lunch, or who you went to homecoming/prom with or how many you attended. I want you to always see the big picture of what’s going on. Those are memories now, not life sentences.

The world absolutely owes you not one single thing. Never. Don’t be a victim. (It seems as if I bring this up in everything I write anymore)  but we live in a society of victims, there is enough of them so don’t blend in. There is always gonna be someone who had it easier than you, but on the same token there is someone who more than likely is gonna have it worse than you. Be happy with what you have and aspire for more, but don’t get too wild in thinking your gonna take over the world.

Don’t spend so much time making a living you forget to live a life. Figure out how to unplug yourself from the world. Get out, hikes, concerts, don’t become so consumed you’re medicated and one bad day away from being in a straitjacket. Last sentence is full experience speaking. I can promise you it will be there tomorrow and you can pick up where you left off.

Chances are just that, Chances: take them.

Go outside your comfort, its good for you and will give you more of a tune of the sense of how the world works than anything. Never be scared to start a conversation, or initiate a relationship. Doubt has killed more success than anything else.

Success is your definition, don’t let anyone take that from you. If your success is a suburb privacy fence and the trip to the local brewery on the weekends, congrats you made it. If you want more, great but don’t belittle someone else’s happiness because its not what you wanted and vice versa. For some the galaxy is never enough and quite frankly its borderline being a villain in a superhero movie.

Your life is for you to be happy, don’t expect everyone else to understand nor follow it. Happiness is an open definition. What I like is for sure not what others like (but my taste in music is better most so we will leave that at that). It’s also not your job to make people understand your happiness, but I feel its everyone’s job to respect it, much like a speed zone that you decide to beat by 15 mph in the middle of a construction zone heading to a regional show in the middle of the night. I’m still not over that ticket.

Every decision you make has a consequence, be ready to live with it and understand it. Again, don’t be a damn victim, Dr. Phil has enough bookings on his show. Know that every person you come in contact with could potentially be a client, a boss, or the middleman of what your seeking. You don’t have to be Mr. Rogers about everything but I do think you need to stand your ground with a sense of respect.

The hard part so many will have trouble with, who you started with, will not be who you finished with. Maturity, time, and life will push and pull people into your life. Learn to embrace it, because if you can’t your gonna be in a centrifuge of emotion that will send you off a cliff like a round bale doing mach 1 coming off a hill. You can’t make people stay in your life, as well as you can’t force them in your life.

Remember, this is a time of change for your parents as well. There are emotions on both ends. They know freedom is days away, and they question everything they ever said and did for you. The dialog of your conversations will start changing. God knows my parents went through hell when I was trying to find my way, but I wasn’t the easiest kid to deal with either. Don’t be scared to still ask them or speak to them about what’s on your mind. Even though you are technically an adult don’t think you can’t call them. They went through the same thing you are but it was a different time for them. Remember, the world changes fast and most aren’t prepared for it.

Parents, remember what you were like in this time, the uncertainty, excitement, the fear and freedom all wrapped up into one crazy psychotic hormonal package. Let’s put in perspective for you guys again, turn on your music, hit shuffle, now its gonna go from Slipknot to Strait, essentially that’s the emotions EVERYONE is going through right now, and don’t forget it as well. I think a lot of people forget this time in life and its just looked at as rebellion instead of finding sense of one’s place and worth in this world.

For a guy who left, lived a lifetime in a few years endured every emotion known to man and finally made his way back home, don’t forget. Boland/Canada said “You’re always 17 in your hometown.” As bad as you may try there will always be those who stick you in that place. Don’t hold it against them, most people can’t won’t recognize growth.

Always remember, with the right music, the right people and attitude of it all, anything you want is merely a small hostage negotiation away, just remember who needs to command the deal and the terms.

Colby Cummings is a guest writer for Ranch House Designs. His opinions on the show cattle industry are thought-provoking and insightful.